The subject of this report in the analysis of Google Inc. that is considered to be the world’s largest search engine provider. Google Inc. is a large technology company which maintains the index of websites, including other online contents for its online customers like advertisers and other online users. The automated search technology by the company assists the users in getting instant access to the information on the Internet directly from its online index. The company is known to provide online search solutions, targeting advertising and other online hosted applications.

Google Inc., which is the company’s official name, is the reflection of large and immense capacity of existing information, with the company’s mission being to organize the information and make it useful and accessible universally. Google is located in the United States of America. The headquarters of Google Inc. is located in Mountain View, California.

Google’s primary industry is Internet services and social media. Google operates in the technology sector with the symbol GOOG. Standard Industrial Classification (SIC) is a system which is used in the classification of industries, using a four digit numerical code. Google’s SIC code is 7370 with a NAICS Code of 517110.

Google has three main customer groups: customers who are capable of organizing information in ways which are very useful, advertisers, and Google network members together with other content providers. There are also other extended segments which include developers and makers as well as mobile users. The customers of Google are very loyal to the firm’s products as compared to other search engine users. The market segments include:

The determinants of demand on the primary products of Google include the following:

The determinants differ greatly across different customer segments because customer needs differ from one segment to another. The observable variables that Google can use to detect changes in the determinants of demand are the observed purchasing patterns of consumers, the age of customers, customers’ occupation, the size of the household, etc. Google can track these observations over time to determine the changes in demand.

Google sales are cyclical because a change in the economic activity can cause a change in the company’s sales. If the economy is not performing well, the company’s sales would decrease as there would be very few people who would be using Google products. Such an economy would lead to reduction in people’s purchasing power as their disposable income would also have decreased. The sales of Google always tend to spike during the start of the school period in August as the young generation is the largest target segment. Therefore, the company experiences high growth rates in sales in August as compared to other months when the sales are much lower.

Elasticity is the measure of how one economic variable responds to the changes in another economic variable. Price elasticity is the responsiveness of the demanded quality to the price change. Moreover, it is a function that takes into account the number of substitutes available on the market, the price level of substitutes in regard to the budget of the customers, and the product durability.

Based on this analysis, Google Inc. faces an elastic demand with regard to its primary demand. This is because the demand for Google products is very sensitive to any changes in the price levels. For example, if Google decides to increase the selling price of its products, then the number of units sold will be much lower. The firm would then become uncompetitive, and the demand would fall drastically. On the other hand, a decrease in the selling price would lead to an increase in the units sold.

The market structure within which Google operates is the oligopolistic market structure. In this type of market structure, only a few firms dominate the market although there are also other small firms which operate in the market. The firms which operate in this type of market can only be identified using the concentration ratios measuring the firm’s total market share which is controlled by the major firms in the market. In the Internet and social services industry, Google has a high market share as compared to other close competitors, like Yahoo.

Oligopolies have a high adoption level to a highly competitive strategy, thus being able to achieve more benefits in the competitive markets, like the low prices. Although there are very few operating firms in the market, their behavior is mainly characterized as being highly competitive. Price stability in this type of market can be very advantageous to the consumers as it can help them plan ahead and develop ways how they can be able to stabilize their expenditures, which can further stabilize the trade cycle. The main aim of companies operating in the oligopolistic market structure is mainly profit maximization.

This market is best described as being international. This is because the majority of the customers of Google services is found all over the world, being highly used as compared to other rival companies like Yahoo. Google, being one of the large companies which dominate the market, has a high pricing power in the industry. Oligopolies like Google are usually price setters but not price takers.

Economies of scale as a barrier to entry

For a company like Google to be successful, it has to develop effective strategies which can enable it to generate profits as high as possible. These could be activities which are aimed at reducing the operation costs and other expenses by the company.

During the past year, many companies in the U.S. experienced better firm performances, including Google. The revenues of Google increased greatly in 2014, with the net profits of the company increasing by $7, 162 million. The following is the analysis of the company’s key financial ratios which are in million USD.

Margin profit in 2014 for Google is calculated as:

The past three years

The profits and sales growth rates for Google are displayed in Figure 1 and Table 1 as shown below:

Figure 1. Google sales and growth rates for the past three years 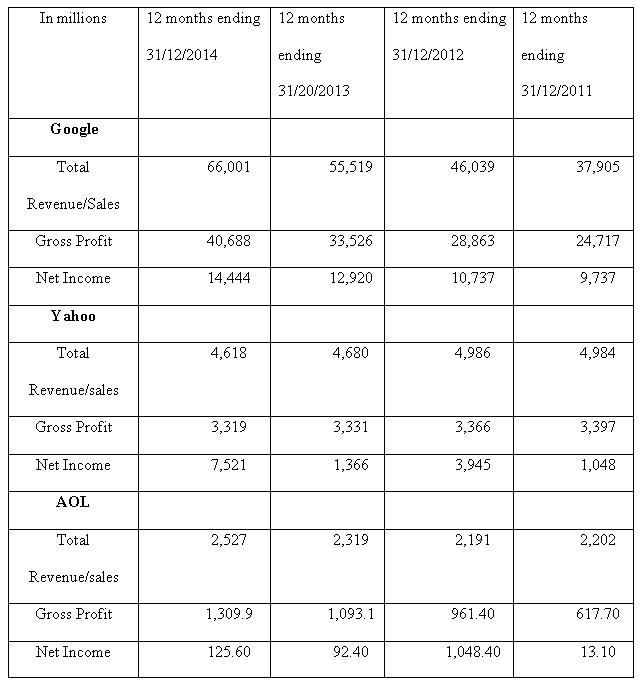 From the analysis of Google’s key financial ratios during the past year, 2014, Google was financially stable and very profitable. Google has been able to match its rivals in the industry as the company has a relatively high profit growth rates as compared to its close rivals, Yahoo and AOL. With Google growing at a fast pace, it enjoyed a very good performance in the market. Over the last three years, Google has had a higher performance in regard to the company’s revenues with an increasing trend from the end of 2011. The gross profit was also fair at the end of 2011; the company recorded a profit growth rate of $24,717 million. The profits continued to grow until 2014 when the company experienced a gross profit of $40,688 million. As compared to other companies, Google is better positioned than Yahoo, which is the major competitor of Google. Having experienced high profits at the end of 2011 and in the next three years, the company’s profit has been on the decreasing scale. AOL, on the other hand, has experienced an increasing growth in the profit margins, matching the growth of Google. Google holds a large market share in the industry in the United States as compared to its rivals, Yahoo and AOL. There is a probability that the company may increase its revenues in the next five years to come.