Families represent one of the basic components of quality nursing care. Nurses are entitled to consider family influences on the health and wellbeing of individual patients. The purpose of the present work is to perform a brief movie family assessment, based on the famous drama-comedy Mrs. Doubtfire. The paper includes the analysis of family processes, values and healthcare beliefs, as well as family functioning based on the Beavers Systems Model.

Mrs. Doubtfire is one of the most popular American family movies. At its center is the character of Daniel Hillard, an actor working in an animation studio. He can be described as a person, who does not treat his life, as well as the lives of others, seriously. The man loves his children truly, madly, and deeply. He enjoys his profession and work. Daniel is a person who can easily find a common language with a child, because his own behaviors often resemble those of a kid. He and his wife Miranda have three wonderful children – Lydia, Chris, and Natalie. Miranda is constantly at work. Unlike Daniel, she is all order. That is, the woman wants her life to be planned and predictable. However, with a husband as disorderly as Daniel she can hardly achieve her goals.

Daniel’s flexibility, fun, and financial instability create an explosive mixture of family conflicts with Miranda. Nevertheless, their children seem to be equally committed to both parents. Lydia is the oldest child in the family. She resembles her mother in that she seeks to order her life and follow predetermined routines. By contrast, her brother Chris copies the disorderly commitments, behaviors, and decisions of his father Daniel. The most creative of all is Natalie, the youngest sibling, who is still growing up but seems to cling more to her father. Their story takes place in San Francisco, California. The context is highly problematic, since Daniel decides to quit his job in the animation studio to try himself in a challenging project. Meanwhile, his wife Miranda keeps working hard to provide for their entire family. Daniel’s decision to organize a birthday party for Chris becomes the last straw. The story unfolds in a divorce setting, after Miranda is granted custody of the three children.

The sociocultural family processes deserve particular attention. The Hillard family is comprised of white Caucasian people. They parents are heterosexual Americans who speak English as their primary language and seem to enjoy a life that is characteristic of a middle-class American. Their environment is characterized by stability and even affluence. The family lives in a large house. Their neighborhood is safe and clean. The family is geographically mobile, even though they do not use available opportunities for moving across the country or beyond. Their contacts with the broader community are limited, since Miranda spends most of her time at work, and Daniel prefers being with his children. He even says, “the bottom line is that I need to be with my children”. Overall, the communication patterns between Miranda and Daniel can be categorized as highly dysfunctional. They either avoid discussing the most pressing issues or misunderstand what each of them wants to say. Both Miranda and Daniel focus on their own needs. For instance, while Daniel is interested in organizing a birthday party for his son, Miranda is furious at the mere thought that such party could be held in their house. They fail to reach any agreement, and the conflict over Chris’s celebration translates into divorce.

Simultaneously, the discussed party looks like a challenge to the established power structure within the family. Miranda holds the power of decision making firmly in her hands. Her formal roles are those of a wife and a mother. She is also a breadwinner and a financial manager. Informally, she is a person who keeps her family and house in order. The role of Daniel is that of a husband and a father. One of the most surprising things about Daniel is that he does not seem to fulfill any other formal roles. He is neither breadwinner nor housekeeper. His cooking talents leave much room for improvement. This is why he occupies an inferior position in the power structure of their family.

Family is the key value promoted by the movie and illustrated by the Hillard family in Mrs. Doubtfire. Despite a wall of misunderstanding, both parents go to unbelievable lengths to make their three children happy. While Miranda works hard to make sure that her children’s material needs are met, Daniel provides love, affection, and entertainment for their kids. They exemplify a non-traditional family, in which gender and family roles are mixed, confused, and reversed. The principal value they articulate is that divorce is an acceptable model of family functioning. In the words of Mrs. Doubtfire, “some parents, when they are angry, they get along much better when they don’t live together”. In other words, divorce can be a better alternative to cohabitation, when a man and a woman can no longer find a compromise over the basic factors influencing their family life.

READ MORE: How to Write a Movie Review Essay?

The process of socialization entails the provision and articulation of family values. In Mrs. Doubtfire, Daniel functions as a source of comprehensive knowledge about what is right and wrong. However, Miranda also takes an active part in socializing their children, even though her role is often limited to that of a judge: “Kids say the darnedest things, – Thank you. Any other choice phrases you’d like to teach our five year old, Daniel?” The phrase suggests that Daniel and Miranda lack any agreement in terms of how their children should be socialized.

In terms of healthcare, Daniel, or Mrs. Doubtfire, displays extraordinary healthcare knowledge and skills. In one of the movie scenes, Mrs. Doubtfire shares her concerns about taking medicines rectally. In another scene, Mrs. Doubtfire uses the Heimlich maneuver to save his former wife’s new boyfriend from death. More specifically, he helps dislodge a shrimp from the larynx of Stuart. In both cases, other family members look surprised, confused, and even lost at the remarkable healthcare skills of Mrs. Doubtfire. Overall, the movie does not feature too many healthcare topics, suggesting that all members of the family are healthy enough to avoid lengthy discussions of their physical and mental health problems. 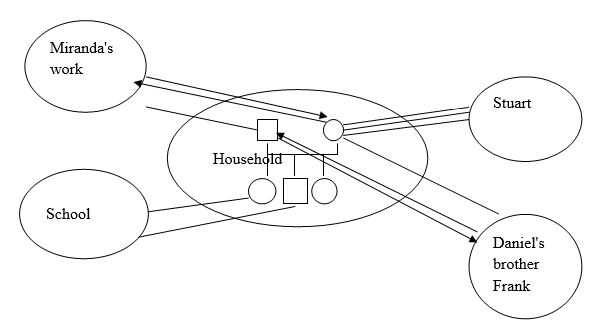 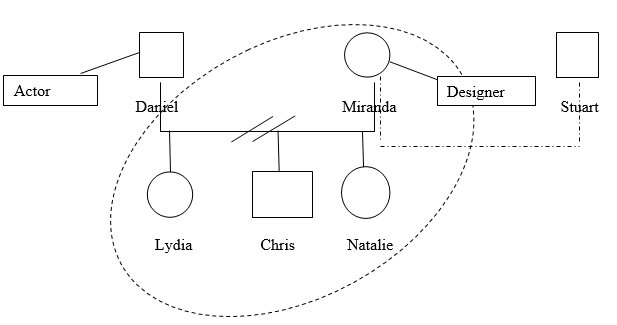 When it comes to adaptation, the first impression is mixed. On the one hand, the family fails to manage its problems and stressors adequately. This is the reason why Daniel and Miranda file for divorce. On the other hand, following the divorce, the family exhibits a notable capacity for adaptation. Miranda decides that they need to find a housekeeper. Meanwhile, Daniel quickly grabs the idea and disguises himself as a woman to be closer to his children. Lydia, Chris, and Natalie gradually adapt to the new routines imposed by Mrs. Doubtfire. They also accept the authority and power of Mrs. Doubtfire. When Chris utters “yeah, no shit”, Mrs. Doubtfire responds: “watch your mouth, young man.” With time, Miranda can no longer imagine her life without Mrs. Doubtfire. The latter relieves the burden of household chores and speeds up children’s adaptation to a new life without their father.

Based on the information provided, the selected family can be compared to the Beavers Systems Model. Beginning with the structure of the family, it can be described as chaotic, incorporating a strong parent-child coalition in the absence of any parental alliances. The boundaries of closeness are indistinct. Even though Daniel and Miranda withhold much of important information from one another, they can easily cross the boundaries of their personal space. The situation with children is similar – neither Miranda nor Daniel sees it as a problem to enter their children’s rooms without warning, even though they try their best to respect each other’s freedoms. The mythology of their family in incongruent, since the ways Miranda and Daniel perceive their family reality are totally different. Their goal-directed negotiations are extremely inefficient, and this inefficiency eventually results in divorce. In the context of autonomy, the expression is rather unclear. Daniel rarely accepts responsibility for his actions. The permeability is particularly low, creating barriers to effective communication. As for the family affect, Daniel is much more likely than Miranda to express his feelings directly. Their moods vary from warmth to cynicism. The conflict between the two parents is severe and unresolved. Their empathy is close to inconsistent, leading to global health pathology.

To summarize, Mrs. Doubtfire offers a valuable insight into family dynamics. The family depicted in the movie is equally pathological, dysfunctional, chaotic, and emotional. The conflict between Daniel and Miranda is so severe that only divorce can resolve it. They face serious barriers to effective communication, which eventually break their family union.